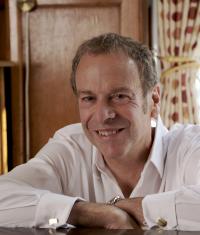 Justin Lavender has sung leading tenor roles at the Royal Opera, Covent Garden, La Scala, and the State Operas of Vienna and Berlin, as well as most of the world’s other major opera houses. He has a parallel concert career and many commercial recordings to his credit, including the highly praised Dream of Gerontius with the CBSO. He teaches singing at the Royal College of Music and is vocal consultant to the choir of King’s College Chapel, Cambridge. A student of Mandarin, he is one of very few western singers able to sing in Chinese, and has been made an honorary professor of the Confucius Institute.

His conducting career began about ten years ago with a number of choral and operatic conducting engagements. Since moving to Buckinghamshire he has co-founded with stage director, Ali Marshall, Arcadian Opera based at Stowe and Buckingham. The company has already mounted full-scale productions of Puccini’s La Bohème and Donizetti’s L’Elisir d’Amore in Justin’s own English translation, as well as a number of highly successful gala concerts. He also took over the musical directorship of Phoenix Singers, and in 2017 conducted their first collaborative concert, Mozart’s Requiem, with Trinity Camerata.