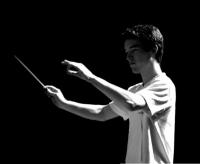 Thomas Molloy grew up in Buckinghamshire and attended the junior Royal Academy of Music from the age of 17 where he specialised in horn and conducting. During his first year of studying history at Durham University, Thomas founded and conducted Durham Sinfonietta. He was appointed conductor of Durham University Symphony Orchestra and Durham Contemporary Music Ensemble, and later the Alumni Orchestra. He has studied conducting with Peter Stark and Douglas Bostock as well as George Hurst on the Canford Summer School of Music Conducting Course. In 2009, he was awarded third prize at the Boswil International Conducting Course in Switzerland.

Following a teacher training course at the Royal Northern College of Music, Manchester and a teaching post in West Sussex, Thomas is now a brass and conducting teacher with Milton Keynes Music Service, where he conducts the Milton Keynes Youth Orchestra. He is a tutor to the horn section of Buckinghamshire County Youth Orchestra. He is a guest conductor of Trinity Camerata and Dunelm Sinfonia. In his spare time, he co-runs Junior Scripts, a company publishing musicals and plays for schools!