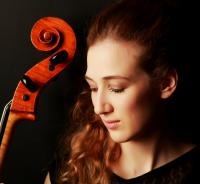 Winner of the Muriel Taylor Cello Prize and the Making Music Award for Young Concert Artists, Adi Tal is emerging as one of the most dynamic young cellists of her generation. She made her solo debut at the age of twelve with Israel Chamber Orchestra, and has since performed with numerous ensembles and orchestras including the Israel Philharmonic Orchestra, Jerusalem Symphony, Haifa Symphony, and Herzliya Chamber Orchestra, collaborating with conductors Thomas Sanderling, Dan Ettinger, Aldo Ceccato and James Judd.

Born in Israel in 1986, Adi began her cello studies at the age of seven with Hillel Zori. She has performed in master classes presented by Steven Isserlis, Bernard Greenhouse, Lynn Harrell, Boris Pergamenschikov, Janos Starker and Natalia Gutman. She received her BMus from the Cleveland Institute of Music where she studied with Richard Aaron, her Postgraduate Diploma from the Royal Northern College of Music as a student of Ralph Kirshbaum and her Masters Degree from the Guildhall School of Music and Drama under David Takeno.

Adi has performed in the Wigmore Hall, St Martin-in-the-Fields, St George's Bristol and the Louvre pyramid in Paris. Her solo and chamber music performances have been broadcast on BBC Radio 3, Singaporean Radio and Israeli Radio, and Adi has recorded a CD of flute trios for Meridian Records with principle flautist of the Israel Philharmonic Orchestra Eyal Ein-Habar. Adi is a member of the Rautio Piano Trio, winners of the Tillett Trust’s Young Artists' Platform, Maisie Lewis Wigmore Award, Park Lane Group Award and the Musician's Benevolent Fund Ensemble Award.