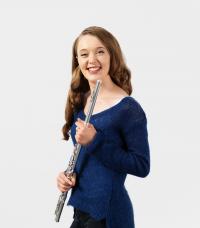 Flautist Emma Halnan first came to prominence as the woodwind category winner of BBC Young Musician 2010. In the grand final, she broadcast Reinecke's flute concerto with the BBC National Orchestra of Wales live on BBC television and radio. Since then, she has gone on to perform at many of the major UK venues including Wigmore Hall, Cadogan Hall and St John’s Smith Square, as well as being broadcast on BBC Radio 2’s "Friday Night is Music Night" as soloist with the BBC Concert Orchestra.

Emma has also appeared as concerto soloist with orchestras such as the European Union Chamber Orchestra and the Welsh Sinfonia. Her 2018 diary has included two performances of Mozart’s Flute and Harp Concerto with the London Mozart Players and royal harpist Anne Denholm; Emma, Anne and LMP also performed live on BBC Radio 3 “In Tune” ahead of the London concert.

Emma is also a highly reputed and very dedicated teacher, her pupils having gained places in the National Children’s Orchestra, National Children’s Wind Orchestra and at Junior Trinity. Emma has taught students at Cambridge University and King’s College London, and given numerous masterclasses.

Emma studied at the Royal Academy of Music with William Bennett and Kate Hill, and previously with Anna Pope at the Purcell School of Music, where she won the 2010 Fenton Leavers’ Award. She later studied privately with Robert Winn. Emma has been generously supported by the Hattori Foundation and the Martin Musical Scholarship Fund. She also won the 2014 Kenneth Loveland Gift, and is a City Music Foundation Artist.