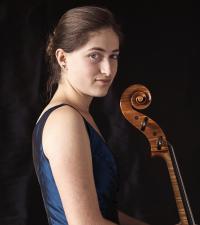 Indira Grier has performed as a soloist and chamber musician across the UK and Europe, and has participated in masterclasses with David Geringas, Frans Helmerson, Thomas Ades and Steven Isserlis. Already the recipient of several international prizes, she completed a Masters degree at the Royal College of Music studying with Alexander Chaushian. Previously she was taught by Melissa Phelps and then by Troels Svane at the Musikhochschule Luebeck.