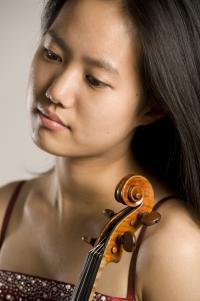 Korean-born British violinist Joo Yeon Sir is winner of the prestigious The Arts Club Karl Jenkins Classical Music Award 2014 in association with Classic FM and The President’s Award presented by HRH The Prince of Wales. She has performed as soloist, recitalist and chamber musician at major venues across the UK including Wigmore Hall, St. Martin-in-the-Fields, St. James’s Piccadilly, Fairfield Halls, Victoria and Albert Museum, the National Gallery and St. James’s Palace in the presence of HRH The Prince of Wales.

Also a composer, Joo Yeon won the coveted title of BBC/Guardian Young Composer of the Year in 2005 and her works have been performed widely and broadcast on BBC Radio 3. At present, she is working closely on own transcriptions and compositions with her violin-guitar duo partner Laura Snowden for Snowden-Sir Duo, supported by International Guitar Foundation Young Artists Platform.