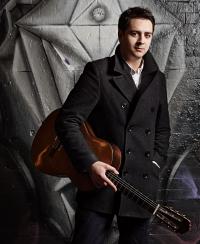 After graduating with first class honours from the Royal College of Music, Manus Noble was awarded a scholarship to do his Masters at the Royal Academy of Music. Noble gave his debut performance at the Cadogan Hall, aged 19. He was given Performance Awards by the Musicians Benevolent Fund, Countess of Munster and Ian Flemming Trusts, and was accepted onto the Park Lane Group Young Artist’s Concert Series at the Purcell Room. He won first prize in the Ivor Mairants Guitar Competition in 2011.

As well as writing for the instrument himself, Noble has developed a flair and passion for modern techniques and repertoire, with many composers choosing to write new works for him.