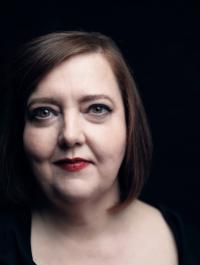 Morag Boyle, contralto, studied Music at the University of Newcastle-upon-Tyne and was subsequently a Cripplegate Scholar studying postgraduate Early Music at the Guildhall School of Music and Drama. She has been a member of the English National Opera Chorus since 1999, while continuing her freelance choral work with the BBC Singers, King’s Consort and London Handel Festival, and performing music for Royal National Theatre and West End productions.

Recent work with the BBC Singers includes Fidelio with West Eastern Divan Orchestra/Barenboim, Nixon in China with John Adams conducting at the BBC Proms and on tour in Berlin, and a live broadcast of a period instrument Messiah.

Her solo engagements outside ENO have included Beethoven Symphony No 9, Tippett A Child of Our Time, Beethoven Missa Solemnis, Bach St Matthew Passion, Duruflé Requiem with Exaudi and the Orchestra of Opera North, also with EC4 at the Barbican, Elijah with Rodolphus Choir and the Orchestra of Opera North, Janacek Diary Of One Who Disappeared with Ian Bostridge and Thomas Ades at the Wigmore Hall, Rossini Petite Messe Solennelle and Puccini Suor Angelica (La Zia Principessa) with Midsummer Opera, Russian Nanny and Beggar Woman in Death In Venice with The Philharmonia and Richard Hickox, Elgar’s The Music Makers, Mahler Symphony No 2, Mozart arrangement of Messiah with The Elysian Singers at St John Smith Square, Third Secretary Nixon in China, Kabanicha Katya Kabanova, Larina Eugene Onegin and Austrian Woman and Marilyn Klinghoffer in The Death Of Klinghoffer.

Solo recordings include Dvořák Mass in D, Rossini Petite Messe Solennelle, Duruflé Requiem, Puccini Suor Angelica and Rachmaninov Vespers. Recently she took a sabbatical from ENO to sing Schwertleide Die Walküre for Stephen Barlow in the first season of the new Grange Park Opera and several projects at the BBC including a concert and recording of Doctor Atomic conducted by the composer where she was on standby to sing Pasqualita.